Winner of the Phoenix Award
from the Children’s Literature Association, 2017

Winner of the Sheila A. Egoff B.C. Book Prize
for Children’s Literature, 1998

“It’s a great adventure tale that would be exciting enough if it weren’t also based on the real sinking of the City of Benares during WW II. A fine work of historical fiction…” Frances Bradburn, Kirkus Reviews

“…One of the brightest stars of the fall publishing season. Heneghan has a way with words – and with everything else that constitutes a fine novel: dialogue, character, setting and action. …a rich and wonderful experience for readers, adult as well as adolescent.” The Globe and Mail

Jamie Monaghan wishes the war would hurry up and arrive in Liverpool. Despite the nightly air raids, the food rationing, and the gas masks he and his friends have to carry with them at all times, World War II has had little effect on life in Jamie’s neighborhood. Jamie longs for a taste of the drama and excitement he hears about every night on the radio. Soon the war hits a little too close to home. Fearing for Jamie’s safety, his parents arrange for him to travel to Canada aboard the City of Benares, a ship carrying 100 young British evacuees. But in wartime, danger lurks in the most unexpected places. Instead of carrying Jamie away from the front lines, the ship brings him closer to battle than he or his parents ever would have dreamed possible. Before his voyage is complete, Jamie’s courage and heroism will be put to the test, and his life will be changed forever. 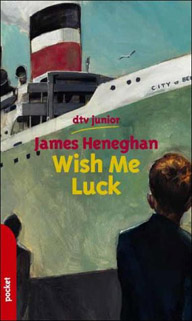 Wish Me Luck, like a concerto, has three distinct movements. Its first movement, dealing with characters and setting, is mainly autobiographical. Jamie Monaghan, the protagonist, is like myself, and I used real names for friends and neighbors. Even Jamie’s address is real: that was the place where I grew up. It is only when we come to the second and third movements of the story that the fictional elements take over, though even here I write about a terrible and real event – the torpedoing of a ship and the unnecessary deaths of 81 children.

FROM HORN BOOK. Based on an actual World War II episode, this historical novel, told in a colorful first-person narration, gets all the details right-from the barrage balloons overhead like “moonlit elephants browsing” to the local “scouse” dialect. …The depiction of shipboard ennui may actually be too well-rendered, as the novel’s momentum briefly stalls. But drama returns full-blast when the Benares is torpedoed by the Germans. The harrowing scenes of survival and heroism in the lifeboats bring Jamie face-to-face with the horrors of war and make him view Bleeker with newfound respect. Although the boys are reunited with their parents, a happy ending is not assured. Bleeker returns to an abusive home; the war continues to rage. 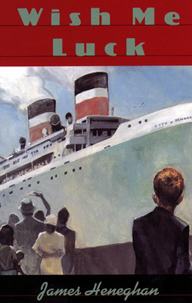 FROM BOOKLIST (Gr. 5-8.) …Based on the historical account of a German U-boat sinking a passenger liner, which was carrying 100 children from war-torn England, the story will provide middle-graders with another perspective on World War II. Heneghan subtly exposes the courage, trust, and utter desperation so many Europeans felt as they sought any safe place for their children, as well as the anger, confusion, fear, and courage of the children themselves. Universal yet ancillary issues of child abuse, poverty, and adolescent cruelty add contemporary authenticity to this historical novel. The sinking of the Benares comes late in the story, and the Liverpool dialect is prevalent; however, readers will find plenty of action, awe, and premonition to carry them to the exciting climax. Although other fiction for younger YAs, such as Michelle Magorian’s Good Night, Mr. Tom (1982), addresses the deporting of English children to safety, this story humanizes what is otherwise just an interesting footnote to the history of World War II.

FRANCES BRADBURN FROM KIRKUS REVIEWS (March 15, 1997). …In the development of several strong characters Heneghan’s writing really shines, particularly in the friendship that emerges between Bleeker and Jamie. It’s a great adventure tale that would be exciting enough if it weren’t also based on the real sinking of the City of Benares during WW II–an author’s note presents the facts. A fine work of historical fiction. (Fiction. 12+) — Copyright ©1997, Kirkus Associates, LP. All rights reserved.

MARIA B. SALVADORE FROM SCHOOL LIBRARY JOURNAL (Gr 5-8). Jamie’s narrative provides insight into the gradual realization of the true impact of war. His language changes as does his character. Allusions to the things of war evolve into a description of a series of horrifying events including surviving 18 hours in the frigid water of the north Atlantic. Tom is an interesting if not fully developed character, perhaps because he is seen only through Jamie’s eyes. Jamie suspects that Tom has been physically abused by his father. Readers see, with Jamie, however, that Tom is a different, stronger, more confident person after his ordeal, and possibly due to his emerging friendship with Jamie. This gripping, fast-paced novel is based on actual events. (Maria B. Salvadore is from the District of Columbia Public Library)

ALEXANDRIA LAFAYE FROM CHILDREN’S LITERATURE. Relying on his own memories of the war in England and the details of an actual attack on an evacuee ship, Heneghan tells an absorbing and often horrific tale of war.

GWYNETH EVANS FROM QUILL & QUIRE. Heneghan tells an exciting, suspenseful story of danger, survival, and friendship… Wish Me Luck does bear comparison with some of the outstanding children’s novels about the war and the evacuees, such as Kit Pearson’s “The Sky is Falling” and Michelle Magourlan’s “Goodnight, Mr. Tom”.

DEBORAH STEVENSON FROM THE BULLETIN OF THE CENTER FOR CHILDREN’S BOOKS. A tough-edged saga with a survival-story appeal, this should draw readers

FROM KATELYNN SCHOOL, HOLLAND ELLEMENTARY SCHOOL, AGE 11. ON UNITEC’S “ENGLISH ONLINE” NEW ZELAND. Hello, I am reviewing a book called “Wish Me Luck” by James Heneghan. It is a powerful book, that makes you appreciate life more. …The story turns into a thrilling race for survival as Jamie discovers more about himself and others in the depth of tragedy. I think this is a great book, with a little humor, some drama, and a little historical fiction as well. I recommend this book to people who like to read sad books, because sad, it definitely is.