Selected for the Ontario Library
Association’s list of Best Bests, 2006

“I give credit to Orca Books and Heneghan for taking current social issues and presenting them in a relevant way …. I hope more books are forthcoming. I think the book will be a hit with teens.” Sally Roessler & Melody Connell, Keamy High School Media Center, New Jersey.

“…Teachers in particular will find this text useful. “
Quill & Quire

“The story moves quickly, and Liam’s experiences will definitely help kids realize the reality of what life has been like in Northern Ireland, during the time of the Troubles.”
– Bookstore Girl, cantstopreading.blogspot.com

“It will appeal to reluctant readers, especially males.”
Kliatt

“All of my seventh graders wanted to read Safe House. I had only two copies and had to tell them that they couldn’t. They heard from a past class that this was the best book to read and all of them signed up for it. Now I have the number cut down from 17 to 4, with 2 sharing each copy of Safe House that we have in the library.” Ann Edwards, Teacher Librarian, Rocky Grove Junior/Senior High School, Franklin , PA. 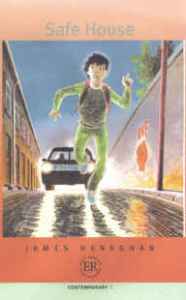 Told in James’ trademark atmospheric voice, twelve-year-old Liam is on the run after his parents are murdered by the IRA. This headlong edge-of-the-seat race through the treacherous world of contemporary Belfast, is both an exciting adventure and a primer on the history of the conflict in Northern Ireland and the futility of tit-for-tat revenge.

FROM HAZEL ROCHMAN IN BOOKLIST. Readers will be drawn by the fast action and the breathless escape adventure, but they’ll also respond to the politics of war in Belfast. In his grief Liam remembers his father’s love (“No man ever wore a scarf as warm as the arms of a child”) and Da’s belief that there was no important difference between Catholics and Protestants––that just a few were to blame for the violence and hatred. The message against revenge, with the famous quote from Gandhi (“an eye for an eye makes the whole world blind”), is part of the drama. True to the boy’s viewpoint, the betrayal and terrorism is very close, especially in the unforgettable images of what is lost.

FROM KEEGAN, AGE 13, IN KIDSWWRITE (www.kalwriters.com/kidswwwrite, July 2007). Safe House is an awesome book filled with thrills and adventure. It’s very suspenseful, and for me, was almost impossible to put down. I would recommend it to readers above the age of 13 because it is a little violent at some points. This reviewer gives Safe House 5 thrilling stars.

FROM DOTSY HARLAND IN VOICE OF YOUTH ADVOCATES (VOYA) – (December, 2006). This stark, tight thriller starts off with a bang and does not stop racing until the Mole is caught. Heneghan’s juxtaposition of Liam’s terror with comforting flashbacks of his gentle, intelligent parents keeps the reader tense but sympathetic. To help teens understand more clearly the conflict between Catholics and Protestants in Northern Ireland, the author provides a helpful appendix of important dates in Irish history. Heneghan’s poignant adventure story will be relished by most teen readers. VOYA CODES: 5Q 4P M J (Hard to imagine it being any better written; Broad general YA appeal; Middle School, defined as grades 6 to 8; Junior High, defined as grades 7 to 9).

FROM SHERRI FORGASH GINSBERG (LIBRARIAN, PASADENA, CA) IN KLIATT (NOVEMBER, 2006). Safe House tells an intriguing story of a murder that takes place in Ireland in 1999… This murder is seen as part of the struggle in Ireland between Protestants and Catholics that has gone on since 1170 AD, when the King of England also declared himself the King of Ireland. The story illuminates a topic that rarely makes it into YA fiction. It will appeal to reluctant readers, especially males. (J–Recommended for junior high school students. The contents are of particular interest to young adolescents and their teachers.)

FROM THE BRANDON SUN (January, 2007). Whoa! The first page offers a gruesome and startling beginning to Liam’s life on the run. Despite the Good Friday peace accord, the tension between Catholics and Protestants is ever-present. His parents are brutally murdered and Liam sees one of their murderers! Now, he must run for his own life while trying to keep his friends and neighbors out of harm’s way. A safe house seems the solution to his predicament. Wrong! It is at this haven that he is further betrayed. The action is nonstop, the treachery terrifying and Liam’s life in constant peril. You should read it!

FROM DAVE JENKINSON IN CM MAGAZINE (September 1, 2006). Recommended, *** stars/4. …On the one hand, Safe House can simply be read as a thriller, one filled with lots of action which occurs over a period of less than two weeks during which time Liam must three times flee from his homicidal pursuer. However, the book’s happenings take place against the background of the Troubles, the attempts by Irish Catholics to unite the divided Ireland while the Loyalists, largely Protestants, try to keep Northern Ireland within the United Kingdom. Consequently, Safe House also offers middle school readers an opportunity to gain some preliminary insights into this conflict. Dave Jenkinson teaches courses in children’s and adolescent literature in the Faculty of Education, the University of Manitoba.

EXCERPT FROM CHAPTER ONE

It was the perfect night for a murder: one o’clock on a dark and rainy Monday morning in early July. It had been a poor summer so far: so much wind and rain; more like winter.

The victim and his wife were sleeping.

The two men wore black balaclava masks. One of the men was big, with wide shoulders. The second man, tall and slim, gave the nod. The big man lowered a shoulder and crashed through the front door. They raced up the stairs, guns at the ready.

The victims were in the front bedroom, the one above the narrow street. They struggled to throw back the covers and leap out of bed but it was too late. The two murderers charged in, spraying the room with bullets. The man and woman did not have a chance: they were dead before their bodies hit the wall. One of the men switched on the light and they fired off a dozen more rounds, just to be sure.

In the bedroom across the hall a boy was awake, deafened and terrified by the noise. He tried but could not move from his bed. Through his open door he could see masked men with guns. He smelled the smoke and powder from the guns, sharp like fireworks, like the house was on fire. He managed to get his feet on the floor but could not stand; his legs refused to support him. Though his ears were ringing from the violence of the explosions, he could hear the gunmen laughing and swearing and he wanted to run, but was tethered to his bed with fear. He was sure they had killed his Mum and his Da—for who could survive such firepower?—and now they would kill him. He had to get out of the house before they discovered him. But he couldn’t move. His knees gave way and he slid off the bed onto the floor, unable to take his eyes off the men and their guns across the narrow hallway.